In this focus area, The Norinchukin Bank aims to utilize accumulated knowledge in food and agriculture, conduct investment and lending, build business partnerships, collaborate with stakeholders, and generate new innovation to promote initiatives to contribute to the preservation and development of local communities and the natural environment. Here, we will turn the AFF industries into sustainable growth industries.

Issues and Direction of Our Initiatives

The Norinchukin Bank has established the “F&A Growth Industrialization Investment Framework” with the aim of collaborating with industry members and businesses both within Japan and overseas and providing them with risk money to support them, in order to increase the added value and productivity of the AFF industries. By investing in this framework, we are contributing toward solving sustainability issues surrounding the AFF industries.

As eliminating dependence on fossil fuels and reducing GHG emissions have become a global issue to combat global warming, the move has been intensifying to use biomass-based materials to produce chemicals instead of conventional petroleum-based ones. Given this, the Bank invested in Green Earth Institute Co., Ltd. (the “company”), which provides the technology to produce green chemicals using biomass-based materials under the F&A Growth Industrialization Investment Framework.
The company strives to disseminate biomass-based products and promote a circular economy by developing the technology of producing ethanol and amino acids to be used as food/feedstuff additives from biomass materials, such as plant stems and leaves, and agricultural and food residue, which do not compete with food and feedstuff. Through this initiative, the anticipated spread of biomass-based products would promote decarbonization and waste reduction and prevent marine contamination. In addition, taking this opportunity, the Bank will leverage its network to strengthen collaboration with the company, contributing to solving the issue of waste disposal for farmers, fishermen and foresters and food product manufacturers, etc., by utilizing and adding high value to agricultural and food residue.

Promoting the Spread of Soy-Based Meat

Given the “protein crisis” caused by global population growth, deepening environmental problems and the increase in ethical consumption, plant-based meats are gaining increasing attention as alternative proteins. In March 2021, we invested in Kumamoto company DAIZ Inc., which is developing, producing and selling plant-based meats.
DAIZ uses its proprietary technology utilizing raw materials made from sprouted soybeans instead of conventional pressed soybeans to make “Miracle Meat,” a plant-based meat that is highly nutritious and with a flavor, texture and aroma similar to that of traditional meat. The Norinchukin Bank is providing investment to not only support their efforts to promote the spread of plant-based meats using domestically produced soybeans but also to introduce sales channels, thereby not only solving food and environmental problems but also increasing consumption of domestic soybeans and increasing the incomes of agricultural producers. 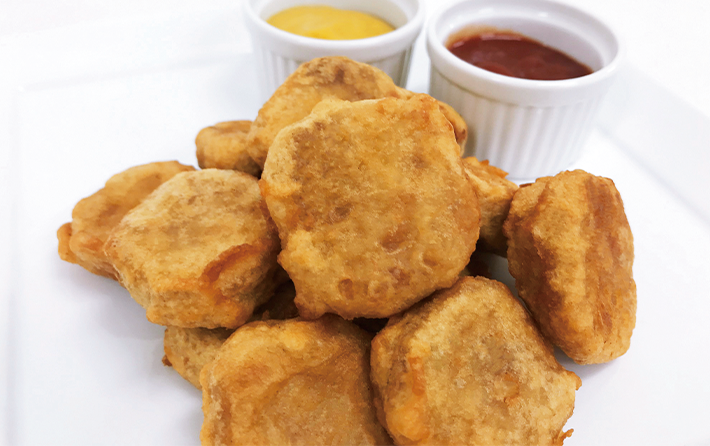 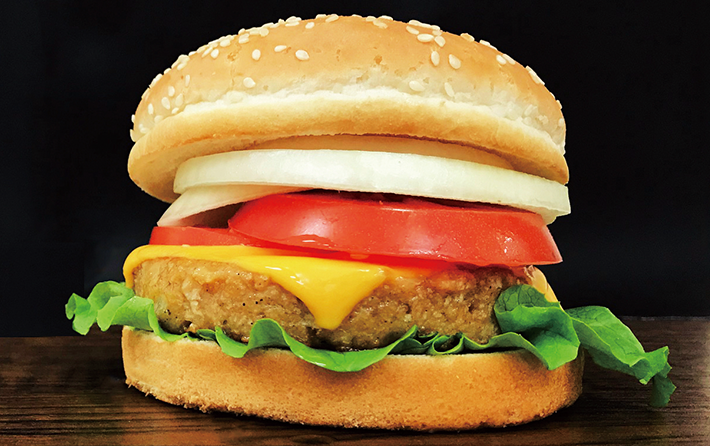 Products made from soybean-derived plant-based meat

Kelp forests, which are home to sea creatures, are recently attracting attention due to their function of absorbing CO2 (Blue Carbon). Meanwhile, it is said that barren urchins left on the seashore could cause shore burning. The shore burning phenomenon is visible throughout the coastlines of Japan, posing an environmental problem. To address that, the Bank began cooperating with Urchinomics (the“company”). The company established the business model of catching barren sea urchins and turning them into commercially viable products by growing them with its own feeding system and other technologies.
To help gain public recognition of these problems and the company’s business model to address them, the Bank gave lectures at seminars jointly with the company. In addition, the Bank provided loans to a fishery company that deploys this business model under the company’s support, thereby contributing to achieving sustainable fisheries by restoring kelp forests and solving the environmental issue. 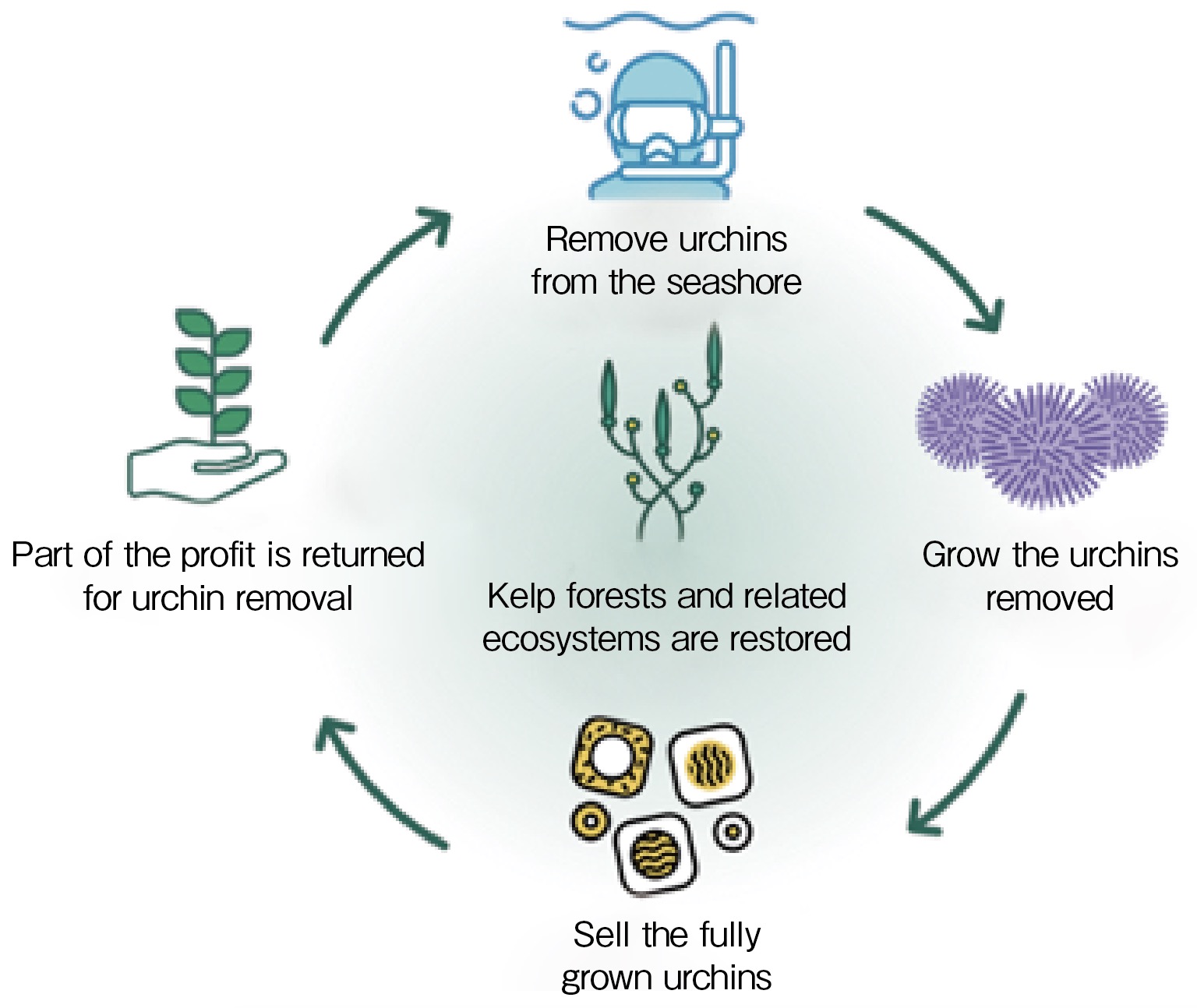 Contribute to a Safe and Secure Food Supply

To construct a sustainable food system, food loss* is one of the key challenges to address.
To address this issue, the Bank, in collaboration with Seven & i Food Systems Co., Ltd. (the“company”), provided support to an initiative to recycle the coffee bean grounds from the Denny’s restaurant chain as feedstuff to be used by dairy farmers. The raw milk produced by the farmers is processed into a white sauce, which is used for menu items at Denny’s restaurants, establishing a recycling loop.

* Amount of food loss from the entire food industry (in fiscal 2019): 17,556,000 tons (Source: Ministry of Agriculture, Forestry and Fisheries “2019 Annual Amount of Food Loss and Rate of Utilization of Recyclable Food Waste (Estimated)“ 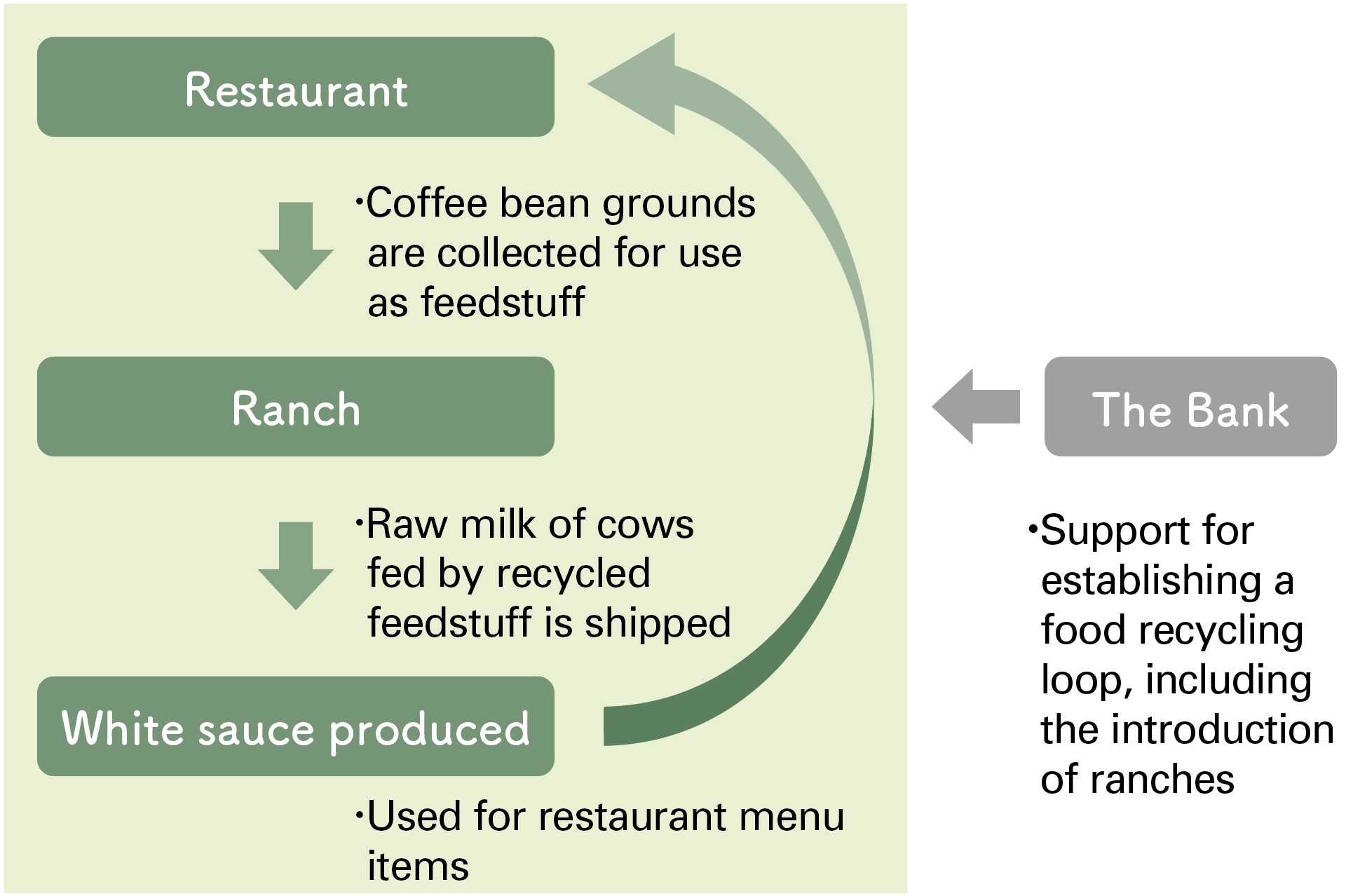 Alliance with the Japan Institute of Agricultural Management, which Trains Next-Generation Farm Operators

The Japan Institute of Agricultural Management (JAIAM) opened in 2013 with the Bank as its main sponsor and has produced 115 graduates in cooperation with member companies. The institute seeks to train next-generation farm operators and agricultural leaders in local communities.
Greeting the approaching milestone of its 10th anniversary in April 2023, the JAIAM will address the challenge of offering new value in the decade ahead, with ideas such as the realization of digital transformation (DX) in education including online education and the evolution of fostering innovators who can play active roles in agribusiness.

*Family farms include those owned by grandparents or relatives. 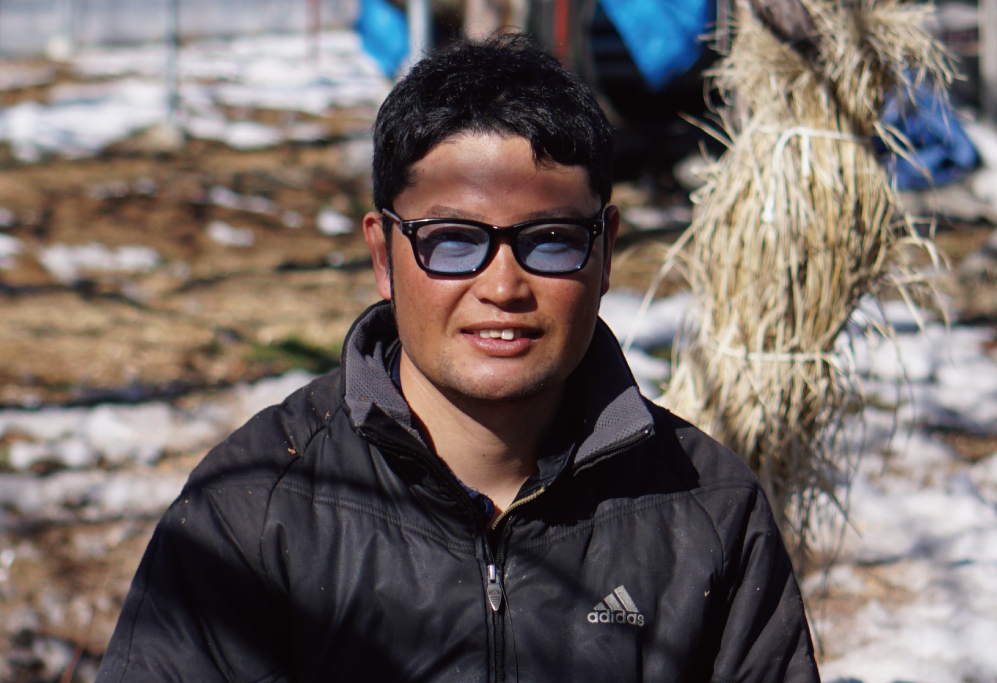 After graduating, I began working in plum management in Nakano City, Nagano, which is where my family lives. When I took my farming job, new plum varieties cultivated by the Nagano Prefectural Agricultural Experiment Station were a big topic of discussion. We secured a farming field in the hope that this would lead to development in plum management. On the sales side, we have been striving to diversify our sales routes, with core sales from shipping to JA Nakano City, plus direct sales to customers, gifts for hometown tax payments and so on. We also worked on creating shipping boxes, pamphlets and office documents, such as invoices. Looking ahead, we will keep coming up with initiatives that help us appeal to consumers about our self-produced Nakano City sourced products. There are many young farmers in Nakano City who enjoy a life of fulfillment each day, exchanging information about cultivation, having personal relationships and so on. In the future, I plan to integrate grape cultivation, a business run by my parents, and create a cultivation plan that looks at both plum and grape work. I still have much to learn, but I will deal with each issue as it comes.

We are promoting a farmstay venture meant to generate profit in the sense that it creates hiring and income in rural areas. In March 2020, we signed a four-way partnership agreement with JA Zen-Noh, Nokyo Tourist Corporation and the Japan Countryside Stay Association. Through this agreement, we are working to realize regional revitalization through the establishment and promotion of the farmstay business.
In addition to providing JA Bank’s financial functions (such as farmstay loans), the bank offers partnership coordination via a broad trading infrastructure.

Regional Revitalization Through Farmstays, Promotion of Farming Areas and Agriculture

From September 2021 to January 2022, as an effort to contribute to the revitalization of rural districts, the four organizations at left held farmstay-themed courses at Marunouchi Platinum University, which offers career courses for businesspeople. This initiative was supported by the Association for Creating Sustainability in Urban Development of the Otemachi, Marunouchi and Yurakucho Districts (commonly known as the Ecozzeria Association). The association cooperates and/or collaborates with entities in or nearby the Dai Maru Yu Area and promotes the environmental symbiosis of city planning in the area.
This course aimed to create sustainable local communities through exchanges between rural and urban areas to solve problems and create fans. In addition to six classroom lectures, fieldwork studies were conducted in the farmstay area to deepen exchanges between urban and rural residents.

In 2019, JA Group established AgVenture Lab, an innovation laboratory, in Otemachi, Tokyo. AgVenture Lab is based on the concept of cultivating the next generation of agriculture, closely supporting daily lives of local communities, and connecting places and people.
At this lab, the various businesses of JA Group connect with start-ups, partner companies, universities, government actors and others who possess technology, ideas and other assets. These players utilize a variety of knowledge and technologies to create new businesses, develop services and resolve social issues. On the hard side, we have set up coworking spaces for start-ups. On the soft side, we work to accelerate innovation based on the JA Accelerator Program, which seeks to generate new business models, soliciting business plans from start-ups and other companies and leveraging the JA Group’s strengths.
In 2020, we held a business plan contest to select companies that would participate in the 2nd JA Accelerator Program; in this contest, eight companies passed the selection process.
The program adopts the key phrase of “innovation of food, agriculture and life”, and covers the wide range of businesses operated by JA Group. It solicits business plans not only in FinTech but also AgTech, FoodTech, LifeTech and others leveraging JA Group’s strengths (e.g., physical storefronts and other infrastructure, customer networks) in an attempt to generate new business models.